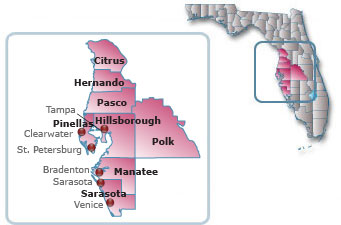 The Tampa Bay region is home to Citrus, Hernando, Pasco, Hillsborough, Pinellas, Polk, Manatee, and Sarasota counties. This region is the 14th largest consumer market in the country, and one in four of Florida's business and information services firms resides in Tampa Bay. The key industries of the region are applied medicine and human performance; business, financial & data services; high-tech electronics and instruments; and marine and environmental activities.

One of the most populous regions in the nation, Tampa Bay is well-known among political activists as a "swing" region on the western end of the so-called I-4 Corridor.

This region includes Hillsborough, Pinellas, Pasco, and Hernando Counties. It is home to over 2.5 million people and the fourteenth-largest television market in the country.

Despite its advantageous geography, the City of Tampa struggled initially due to Indian raids and yellow fever. Tampa boomed after phosphates were discovered nearby in the mid-1880s and Henry Plant extended his rail line down to the city. The relocation of some cigar factories by Vicente Martinez Ybor further fueled the city's growth. Today, the Ybor City District boasts many historic structures and is itself a National Historic Landmark.

Tampa has a population in excess of 330,000. Its has a diverse economy and is home to a number of businesses, including Kforce, SYKES, and Bloomin' Brands (operator of restaurant chains including Outback Steakhouse, Carrabba's Italian Grill, and Bonefish Grill). Like many places in Florida, Tampa boasts a robust tourist economy, but many residents are also employed in white collar/administrative positions and health care.

Located just outside of the city is MacDill Air Force Base. MacDill hosts both the U.S. Central Command and Special Operations Command. It is also the location from which so-called "Hurricane Hunter" aircraft are based out of. The base directly employs over 14,000 and contributes an estimated $5 billion to the economy of the Tampa Bay area.

Tampa is served by the Port of Tampa Bay, which handles the most cargo of any port in the state. It specializes in bulk cargo, especially steel and phosphates. It is also a busy cruise ship port, seeing almost a million passengers annually.

All Property Management ranked Tampa as the second-best city in the U.S. for investing in rental properties in 2014.

The City of St. Petersburg is across Tampa Bay from the City of Tampa, on a peninsula that is bound by the bay and the Gulf of Mexico. The city holds the distinction of hosting the first commercial airline with regularly-scheduled flights, which went across the bay to Tampa twice a day beginning on January 1, 1914. The 1924 completion of the Gandy Bridge negated the need for the airline and cut the distance drivers had to travel by half.

St. Pete, home to just shy of a quarter-of-a-million people, is the largest city in Florida that is not its county's seat. It hosts many businesses, including Raymond James Financial, Home Shopping Network (HSN), and Jabil Circuit. The city's economy is strong in administrative and white collar jobs, as well as high-tech manufacturing, in addition to tourism and healthcare.

The seat of Pinellas County, Clearwater is home to over 100,000 people. Pinellas broke away from Hillsborough County in 1912, citing neglect from the county government and difficulty traveling to Tampa.

Like the other cities of the region, Clearwater's economy is strongly supported by white collar and administrative positions, though tourism and healthcare are also important economic engines. Tech Data, a Fortune 500 company, is one of the businesses headquartered in Clearwater.

The city hosts a campus of St. Petersburg College and the Clearwater Christian College.

Polk County lies at the center of the state of Florida. Indeed, a study by the University of Florida shows that Polk County has been the center-point of Florida's population since 1960. The county is growing because of its location along the I-4 Corridor between Tampa and Orlando. Today, Polk County is home to over 600,000 people. Lakeland/Winter Haven is the 94th largest radio market in the U.S.

Warner University is located in the small city of Lake Wales and Webber International University is nearby in unincorporated Polk County.

In 1885, Lakeland incorporated as a city. It had grown due to the extension of the railroad in the area. It has expanded steadily and rapidly, becoming the spring training home of the Detroit Tigers in the 1930s and a flight instruction center during World War II.

The city of about 100,000 has long benefitted from its proximity to phosphate mines and citrus groves. Healthcare and tourism are also strong economic drivers. The headquarters of Publix Supermarkets is located in the city, and the Fortune 500 grocery chain is the city's largest employer. Saddle Creek Logistics Services is also headquartered in Lakeland.

The city is home to Southeastern University, Florida Southern College, and campuses of Polk State College and Webster University. It is also home to the newest member of the Florida State University System. Florida Polytechnic University is strategically located in Lakeland, FL, on the I-4 high-tech corridor and focuses on STEM programs, specifically technology and engineering.

Twenty-five years after Winter Haven incorporated as a city, in 1936, tourist attraction Cypress Gardens opened for business. It was the first theme park in the country and entertained guests with botanical gardens, beautiful women and exhibitions of water sports, especially waterskiing. The completion of the interstate highway system and opening of Walt Disney World in nearby Orlando caused the park to fall on hard times. The gardens were incorporated into Legoland Florida, which opened on the site in 2011.

The first Publix Supermarket opened in Winter Haven in 1930, though the grocery chain's corporate headquarters are in nearby Lakeland. The economy of the city of over 30,000 is focused on tourism and healthcare.

The main campus of Polk State College is in Winter Haven.

Consisting of Manatee and Sarasota Counties, the Sarasota area is home to over 700,000 residents.

Originally a planned community, North Port Charlotte was incorporated in 1959. The name was shortened to "North Port" in 1974 by popular referendum. The city of over 50,000 is large, containing around seventy-five square miles of territory.

Primarily a bedroom community, North Port's economy is driven by services including health care and education.

The city hosts the North Port Instructional Site of the University of South Florida Sarasota-Manatee.

Technically incorporated in 1943, Bradenton is the merger of two cities, Manatee and Bradentown, which were incorporated in 1888 and 1903, respectively. It is the seat of Manatee County and home to around 50,000 people. Bradenton is on the southern shores of Tampa Bay and the Sunshine Skyway bridge connects it to St. Petersburg.

Health care is the primary motivator of Bradenton's economy, though tourism and other services are also strong. Additionally, the facilities for producing Tropicana juice are in Bradenton. The Bealls department store was founded and is still headquartered in Bradenton (though a chain of stores from Texas with the same name forces them to use the name "Burkes" in many markets).

Higher education opportunities within the city are available at the State College of Florida, Manatee-Sarasota.

The origins of the word "Sarasota" are a mystery. "Zara Zote" might refer to Sara, the daughter of Spanish explorer Hernando de Soto, or it might come from a Native American phrase that refers to an easily-spotted landfall. Regardless, the name "Sarasota" was settled on by 1839, after the United States took possession of Florida. Sarasota was incorporated as a town in 1902 and is the seat of Sarasota County.

Two of the Ringling brothers took their circus money and invested some of it in the town, which incorporated as a city the year after they arrived, 1913. The Ringlings brought their "Greatest Show on Earth" to Sarasota in the winter and created developments. Today their estates are historic structures, and their wealth created an institute of higher learning, a museum, and other institutions that give the city a cultural life in excess of what would normally be expected for a city of just over 50,000. Sarasota hosts theaters and operas, an orchestra with the Florida West Coast Symphony, gardens, festivals, and more.

The strongest segment of Sarasota's economy is health care, though it is also strong in white collar and administrative careers, as well as tourism and other services. Boar's Head Provision Company is one company that is headquartered in the city.

The University of South Florida Sarasota-Manatee is located in the city. New College of Florida occupies a campus that includes the former estate of Edith and Charles Ringling. Sarasota is also home to the Ringling College of Art and Design.

My name is Sue Goldthorp. I am a real estate broker and co-founder of Visulate. Drop me a line if you would like me to help you buy or sell a property in Tampa Florida.

There are 118 cities in Tampa Florida. These are listed below. Click on a link for details.