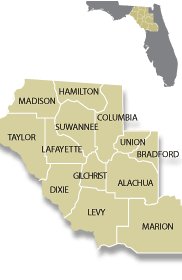 The Florida Department of Corrections operates facilities in unincorporated areas in Marion County, including the Lowell Correctional Institution and the Lowell Annex.

A Metropolitan Statistical Areas (MSA) contains a core urban area of 50,000 or more population. Each metro area consists of one or more counties and includes the counties containing the core urban area, as well as any adjacent counties that have a high degree of social and economic integration (as measured by commuting to work) with the urban core. There are 2 Metropolitan Statistical Areas (MSAs) in the North Central region:

The core urban area is Gainesville (population 124,354 in 2010) and includes Gilchrist and Alachua Counties. There are 2 cities in Gilchrist and 8 in Alachua. The Gainesville MSA is home to the University of Florida and much of the economy relies on Florida's top university.

Outside of the city, Alachua County is one of the most important agricultural areas in the state. It is a historical center of cattle ranching and ranks among the top five in the state for livestock production, whether it's cattle, pigs, or goats. Alachua also produces plenty of tobacco, peanuts, and corn. There are over 35,000 jobs in Alachua County's agriculture industry.

Established in 1925, Gilchrist County is the youngest in Florida. The rural county has a population just over 16,000, but has expanded at a rapid rate since the 1960s. Cattle ranching is also an important industry in Gilchrist, which has the 16th-most cattle of any county in the state. Both counties produce significant quantities of blueberries, peppers, cucumbers, potatoes, and squash.

Fortunate to be situated along the Fernandina-Cedar Key railroad, Gainesville replaced Newnansville as the economic center of the region beginning in 1854. It became the county seat in the same year. Incorporated during Reconstruction in 1869, Gainesville had become an important center of commercial shipping by the 1880s, with many agricultural products moving through the city. Manufacturing built up in the late 19th century.

In 1906, the state of Florida selected Gainesville as the site for the consolidated state university for white males. Originally in a rural setting, gates had to be closed at night to prevent cattle from wandering around campus. Today, Gainesville is the proverbial college town, with over a quarter of the city's population between 20-24.

The University of Florida is the flagship of the State University System of Florida. It is a member of the elite Association of American Universities, an invitation-only organization that is comprised of just over 60 of the top research universities in North America. It is consistently ranked as one of the best universities in the country by such organizations as U.S. News and World Report and Forbes, as well as best value by Kiplinger's, Fiske Guide to Colleges, and Washington Monthly.

UF is one of the largest universities in the nation by enrollment with around 50,000 students. The 2,000-acre campus hosts 4,000 faculty in 16 colleges. The university attracts $400 million annually in research funding and offers over 100 undergraduate degree programs and more than 200 graduate degrees. The university's main campus employs over 14,000, making it the largest single employer in the county.

Much of Gainesville's economy comes from the University of Florida and supporting businesses. The city's strengths lie in healthcare and tourism, though information technology is growing with businesses such as MindTree and SumTotal. Tech companies are actively incubated at Innovation Square, a public-private partnership that helps start-up companies with access to office space, venture capital, and administrative support.

The healthcare industry includes the University of Florida's Health Science Center and Shands Hospital, recognized by U.S. News and World Report as a top hospital. Shands operates a specialty hospital dedicated to cancer and one for children. Shands is the second largest employer in Alachua County with over 12,000 working there.

Gainesville boasts of many cultural activities, most of which are connected to the university, including performing arts, museums, and film. The city includes or borders many lakes, making it a popular destination for kayaking, canoeing, fishing, and snorkeling. There are also numerous parks for landlubbers to bicycle, hike, and climb trees.

Gainesville Regional Airport, located at the eastern edge of the city, serves the region with regularly-scheduled commercial flights and its general aviation needs. The maintenance facility for Silver Airlines is located at GRA. The airport is responsible for over 2,000 jobs and the Florida Department of Transportation estimates its impact at over $230 million.

In addition to the University of Florida, Santa Fe College's main campus is in northwest Gainesville. Many Santa Fe students transfer to UF. Additionally, City College operates a campus near the downtown area.

Originally called "Alligator" by the American settlers, who took the name from a neighboring Seminole village, Lake City was incorporated in 1859. Just two years later, Florida seceded from the United States and the Civil War began. The only major battle of that war fought in Florida, the Battle of Olustee, took place about fifteen miles east of the city in 1864. Southern troops defeated the Northerners, saving the capital, Tallahassee, from capture.

Healthcare and services are the strongest economic forces in this area. Three of the area's ten largest employers are healthcare providers.

PCS Phosphate operates a plant that produces phosphate for industrial purposes. Though the plant is in White Springs, which is in Hamilton County, the facility to transship from truck to railcar is in Lake City. PCS Phosphate is the single largest private employer in Columbia County. Their White Springs facility produces over 4 million tonnes of phosphate products.

Also located in Lake City is TIMCO, an aviation maintenance, repair, and overhaul (MRO) provider. Their Lake City complex includes six hangars from which they perform airframe base maintenance.

The Lake City Gateway Airport is managed by the city. Though there are no commercial flights, the airport handles general aviation and air taxi traffic. It also stays busy with craft going to and from the TIMCO facility. The airport also houses the U.S. Forestry Service's only fire support base in the southeast. The airport contributes an estimated $70 million to the local economy and employs around 1,500.

Florida Gateway College is located next to the airport. The school has a student population around 7,000. FGC began life as the Columbia Forestry School in the 1940s, though its forestry program was dropped in 2010 due to lack of interest.

The core urban area is Ocala and includes Marion County, which has five incorporated municipalities and a population in excess of 330,000. This area is referred to as the horse capital of the world, with nearly 50,000 horses during the peak of the season.

Agriculture plays a big part in this MSA; it is the 12th largest cattle producer in the state with around 47,000 head of cattle. Much of the cattle from this area is bred and sold as calves to ranches in the western part of the nation. The annual Ocala Bull Sale is the oldest one of its kind in the country. Marion County farms produce large quantities of peanuts and hay. With over 250,000 acres dedicated to forestry, timber is also an important agricultural output.

Ocala-area thoroughbreds can claim many firsts, including first Florida-bred horse to win the Florida Derby and first Florida-bred horse to win the Kentucky Derby. The horse industry accounts for over 40,000 jobs and more than $2.2 billion in contributions to the local economy. No county in the United States has more horses and ponies living within its boundaries than Marion.

Nearly a third of Marion County residents are 62 or older.

Home to over 50,000, the population of Ocala grew more than 20% from 2000 to 2010. It is the seat of Marion County. The city lies just west of the Silver River, which is part of the St. Johns River system. Silver Springs forms the headwaters of the river and puts out almost 550 million gallons of fresh, drinkable water every year.

Ocala was named for a Native American settlement that was recorded by the expedition of Spanish explorer Hernando de Soto in 1539. The region was settled by Americans beginning in the 1820s and Fort King was established in 1827 to keep the Seminoles and settlers separate. When Marion County was organized in 1844, the fort served as its first courthouse.

Ocala was incorporated in 1846. The city that grew around the military base was quickly selected as the county seat. Steamships carrying supplies and people to points south passed through Marion County, bringing visitors to the city. The completion of a railroad line in the 1870s enlarged the population, but it was the implementation of phosphate mining in the late 1880s and early 1890s that transformed the city into a financial and industrial center.

Today, the economy is strong in the healthcare, manufacturing, and tourism sectors. Ocala's manufacturing industry is large for the state, especially with respect to plastics and furniture. Lockheed Martin operates a production facility that creates items for space applications, among other products.

Ocala's proximity to natural beauty makes it a popular tourist destination for outdoor activities. The city is just west of Silver Springs State Park, which was the first tourist attraction in Florida because of its clear water and glass-bottom boat tours. The city is also close to the Ocala National Forest, which features 383,000 acres of natural splendor. There are several nearby golf courses. The city itself is the cultural heart of the region and contains art galleries and museums, as well as performing arts centers.

On the western edge of the city limits, Ocala operates the Ocala International Airport. The airport serves the region's general aviation needs. Though there are no regularly scheduled commercial flights, the airport serves charters, air taxis, and air cargo.

About ten miles northwest of the city limits is the Lowell Correctional Institution, which was the first state facility to solely house female inmates. The Lowell complex includes the Lowell Annex, which is a more secure facility and houses the state's female death row inmates.

My name is Sue Goldthorp. I am a real estate broker and co-founder of Visulate. Drop me a line if you would like me to help you buy or sell a property in North Central Florida.

There are 76 cities in North Central Florida. These are listed below. Click on a link for details.