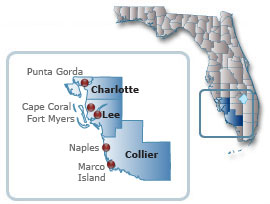 Southwest Florida consists of Charlotte, Lee, and Collier counties. This region borders the Gulf Coast and is home to over 600 technology businesses, as well as many retail, tourism and healthcare industry businesses. The population is approximately 1.1 million people. Florida Gulf Coast University was founded in this region in 1991 and has drawn new businesses to the area.

Charlotte County is home to over 150,000 people. Once named "Trabue" after the city's founder, Punta Gorda is the only incorporated municipality in the county. The city of over 15,000 serves as the county seat.

Phosphate was discovered along the Peace River near Punta Gorda in 1885. The rock was shipped down the river to Punta Gorda to be packed and shipped until the completion of a railroad extension to Port Boca Grande in 1905.

The economy's strength lies with tourism and healthcare. The Punta Gorda Airport is three miles southeast of the city.

Occupying the same region as Lee County, the Cape Coral-Fort Myers MSA is home to over 615,000. Fort Myers-Naples is the 64th largest television market in the nation. Fort Myers-Naples-Marco Island is the 62nd largest radio market.

The area is a popular tourist destination and spring training ground for major league franchises.

A city of over 150,000, Cape Coral is the most populous city in Southwest Florida. It holds the distinction of containing the most navigable inland waterways of any city in the world at over 400 miles. The city is located on a peninsula that juts out into the southern end of Charlotte Harbor with the Caloosahatchee River making up the city's southern border.

Originally a planned community mostly inhabited by retirees, Cape Coral underwent a boom in the 1990s that diversified its population.

Cape Coral's economy is largely based on tourism, healthcare, and construction. The city's population has continued to boom through the early 2010s, growing by almost 10% from 2010-2013.

The seat of Lee County and home for over 60,000, Fort Myers is the commercial center of Lee County. Built by the United States military as an outpost during the Seminole Wars, the fort was occupied by the North and was the site of the Battle of the Fort Myers, the southernmost battle of the Civil War. Thomas Edison built a home in the city in the 1880s, then convinced his friend Henry Ford to do the same. Both homes now welcome visitors.

The economy of Fort Myers is driven by healthcare, tourism, and manufacturing.

Concurrent with the Naples-Marco Island MSA, Collier County is home for over 300,000 people. The largest county in Florida by land area, most of Collier is not available for development due to the presence of Everglades National Park and the Big Cypress National Preserve. The coastal areas feature higher concentrations of population, while more inland communities tend towards agriculture.

The first commercial oil well in the state was dug at Sunniland in 1943.

Collier County is home to a satellite campus of Florida SouthWestern State College, a campus of Hodges University, and Ave Maria University.

The sixth-wealthiest city in the nation per capita, Naples is home to about 20,000 residents, about half of which are over the age of 62.

Though the railroad was completed to the city in 1927 and the Tamiami Trail linked it by road to Miami and Tampa in 1928, the Great Depression kept the city from beginning to grow in earnest until after World War II.

The economy of Naples is strong, with over 10,000 businesses in the city. Its primary drivers are tourism, healthcare, and real estate. Naples is home to Beasley Broadcast Group, Newsbank, and ASG Software Solutions. Arthrex and INgage Networks are located in the adjacent neighborhood of North Naples.

In the late 1890s, an archaeological expedition led by Frank Hamilton Cushing journeyed to Southwest Florida. On Marco Island, sometimes referred to as Key Marco, the expedition found tools and pottery that provided evidence of how the Calusa Indians lived before the arrival of Columbus. Many of the recovered artifacts became property of the Smithsonian Institution, including the famed "Key Marco Cat".

Today, Marco Island is a popular tourist destination and home to over 16,000 people. Nearly half of the population is over the age of 65. It was developed in the 1960s and incorporated in its present form in 1997. It is the only developed island of the Ten Thousand Islands.

The economy of Marco Island is largely driven by tourism. Visitors are attracted by the warm weather, beaches, nature, and wildlife.

My name is Sue Goldthorp. I am a real estate broker and co-founder of Visulate. Drop me a line if you would like me to help you buy or sell a property in South West Florida.

There are 29 cities in South West Florida. These are listed below. Click on a link for details.