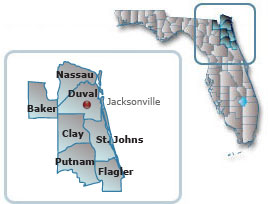 There are two Metropolitan Statistical Areas (MSAs) in Norteastern Florida:

The Jacksonville MSA (population 821,784 in 2010) includes Baker, Clay, Duval, Nassau, and St Johns Counties. There are 4 cities in Baker, 5 in Clay, 4 in Duval, 5 in Nassau and 6 in St Johns. The population for the whole MSA is 1.3 million. The city of Jacksonville is Florida's largest by population and the largest city in the contingent United States by area.

Median household income levels in the Jacksonville MSA are slightly higher than average for Florida. It has a diversified economy that is less dependent on tourism than other areas of the state. Jacksonville has one of the lowest overall costs of living in Florida and in the US with a cost of living index of 94.9 compared to a national average of 100.

Situated along the St. Johns River where it meets the Atlantic coast, Jacksonville's natural advantages have long been known. In 1564, the French established Fort Caroline there. The Spanish conquered the settlement the following year. Under British rule in the 18th century more people moved to the region because a road allowed ranchers to move cattle between Florida and Georgia. After the United States took possession of Florida, American settlers named the area "Jacksonville" after Andrew Jackson, who was the first governor of the Florida territory. Jacksonville incorporated as a town in 1832.

In the latter part of the 19th century, Jacksonville became a popular winter resort for wealthy northerners. After the Great Fire of 1901, much of the city had to be rebuilt. In response to suburban sprawl and white flight, the governments of the City of Jacksonville and Duval County merged in 1968. A local newspaper claimed that this formed the world's largest city by area.

Jacksonville's economy is diversified, strong in healthcare, administration, tourism, and manufacturing. It is also an important center for banking and insurance. The city is a major transportation hub, featuring rail links, a port of entry that is the third-busiest in the state, an international airport, and three general aviation airports. The Port of Jacksonville directly employs 23,000 people and estimates its economic impact at almost $19 billion. The economic impact of Jacksonville International Airport is estimated by the Florida Department of Transportation at over $2.1 billion.

Naval Air Station Jacksonville was built just before the United States entered World War II. Located in the Westside neighborhood, NAS Jax is the third-largest navy base in the country and the largest in the southeast. It directly employs over 22,000 people and the facility estimates its economic impact at $2.1 billion. Naval Station Mayport, located at the mouth of the St. Johns, employs about 14,000.

The city's status as a transportation center and the low cost of living make it attractive as a headquarters location. The city is home to three Fortune 500 companies: CSX, Fidelity National Financial and Fidelity National Information Services. There are over 80 other business with national or divisional headquarters in the city, including Fortune 1000 logistics company Landstar System, Inc., Bi-Lo Holdings, which owns the BI-LO? and Winn-Dixie supermarket chains, the Florida East Coast Railway, manufacturing concern Saft America, retailer Stein Mart and web.com.

The oldest continually-inhabited city established by a European in the United States, St. Augustine was founded in 1565 by Spaniard Pedro Menendez de Aviles. Now a national monument managed by the National Parks Service, the Castillo de San Marcos was completed in 1695 and guarded Spanish shipping lanes for almost a century. St. Augustine served as the capital of East Florida until the United States took possession, which moved it to Tallahassee in 1824.

In the 1880s, Henry Flagler, who built his fortune with Standard Oil, arrived in St. Augustine and began purchasing and organizing the railroads, founding the Florida East Coast Railway. In St. Augustine he built two luxury hotels for those railroad passengers to stay at and enjoy the city and its weather. In the 1960s, Dr. Martin Luther King, Jr. led peaceful protests in the city aimed at integrating schools. These efforts were key in raising awareness of the need for civil rights legislation and led to the passage of the 1964 Civil Rights Act. Modern St. Augustine is a center of tourism, hosting millions of visitors annually.

St. Augustine is the seat of St. Johns County, one of the original counties organized in Florida. The city is home to over 12,000 and the area is inhabited by more than 60,000.

Tourism and healthcare drive St. Augustine's economy. St. Augustine is a popular destination because of its history, beaches, and abundance of nearby golf courses.

St. Augustine's higher education facilities include Flagler College, which occupies one of the luxury hotels built by Henry Flagler, the Ponce de Leon. The newest campus of St. Johns River State College is located just outside of the city. Also in the city is the Florida School for the Deaf and Blind, which provides secondary and post-secondary educations.

The seat of Putnam County and principal city of the Palatka Micropolitan Area, Palatka is home to over 10,000. The city lies about sixty miles south of Jacksonville on the St. Johns River. A plurality of residents are African-American, and fewer than five percent identify as Hispanic.

Palatka has historically been an important port city, inland on the St Johns. Additionally, the city has a strong manufacturing base, including Georgia Pacific and Veritas Steel. Healthcare and tourism are also strong drivers of the city's economy. Palatka has positioned itself as a center for eco-tourism, with proximity to many state parks, Ocala National Forest, and the Florida Trail.

The main campus of St. Johns River State College is located in the city.

Employment in Palm Coast is primarily in the service sectors, including tourism, education, and healthcare.

Palm Coast is the principal urban center of the Palm Coast MSA and was home to 75,180 in 2010. Palm Coast is a young city and has more than doubled in population every decade since 1980. With the Atlantic Ocean, Intracoastal Waterway and 79 miles of canals, there is plenty of waterfront property in the area.

My name is Sue Goldthorp. I am a real estate broker and co-founder of Visulate. Drop me a line if you would like me to help you buy or sell a property in North Eastern Florida.

There are 48 cities in North Eastern Florida. These are listed below. Click on a link for details.